Prophet includes functionality for time series cross validation to measure forecast error using historical data. This is done by selecting cutoff points in the history, and for each of them fitting the model using data only up to that cutoff point. We can then compare the forecasted values to the actual values. This figure illustrates a simulated historical forecast on the Peyton Manning dataset, where the model was fit to an initial history of 5 years, and a forecast was made on a one year horizon. 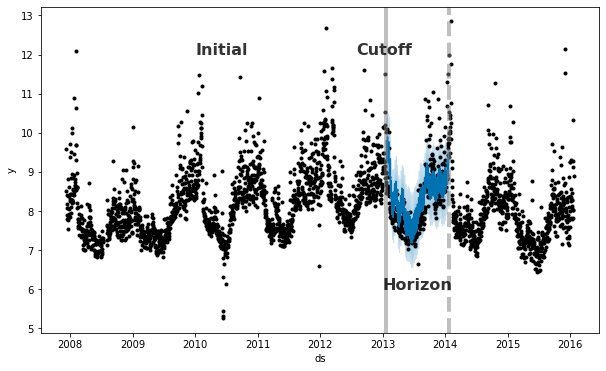 This cross validation procedure can be done automatically for a range of historical cutoffs using the cross_validation function. We specify the forecast horizon (horizon), and then optionally the size of the initial training period (initial) and the spacing between cutoff dates (period). By default, the initial training period is set to three times the horizon, and cutoffs are made every half a horizon.

The output of cross_validation is a dataframe with the true values y and the out-of-sample forecast values yhat, at each simulated forecast date and for each cutoff date. In particular, a forecast is made for every observed point between cutoff and cutoff + horizon. This dataframe can then be used to compute error measures of yhat vs. y.

Here we do cross-validation to assess prediction performance on a horizon of 365 days, starting with 730 days of training data in the first cutoff and then making predictions every 180 days. On this 8 year time series, this corresponds to 11 total forecasts.

In R, the argument units must be a type accepted by as.difftime, which is weeks or shorter. In Python, the string for initial, period, and horizon should be in the format used by Pandas Timedelta, which accepts units of days or shorter.

Custom cutoffs can also be supplied as a list of dates to the cutoffs keyword in the cross_validation function in Python and R. For example, three cutoffs six months apart, would need to be passed to the cutoffs argument in a date format like:

The performance_metrics utility can be used to compute some useful statistics of the prediction performance (yhat, yhat_lower, and yhat_upper compared to y), as a function of the distance from the cutoff (how far into the future the prediction was). The statistics computed are mean squared error (MSE), root mean squared error (RMSE), mean absolute error (MAE), mean absolute percent error (MAPE), median absolute percent error (MDAPE) and coverage of the yhat_lower and yhat_upper estimates. These are computed on a rolling window of the predictions in df_cv after sorting by horizon (ds minus cutoff). By default 10% of the predictions will be included in each window, but this can be changed with the rolling_window argument.

Cross validation performance metrics can be visualized with plot_cross_validation_metric, here shown for MAPE. Dots show the absolute percent error for each prediction in df_cv. The blue line shows the MAPE, where the mean is taken over a rolling window of the dots. We see for this forecast that errors around 5% are typical for predictions one month into the future, and that errors increase up to around 11% for predictions that are a year out. 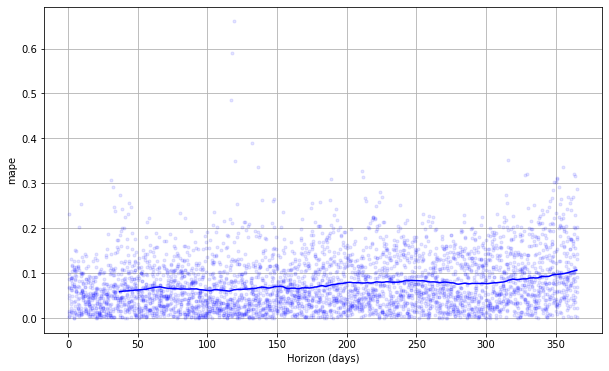 The size of the rolling window in the figure can be changed with the optional argument rolling_window, which specifies the proportion of forecasts to use in each rolling window. The default is 0.1, corresponding to 10% of rows from df_cv included in each window; increasing this will lead to a smoother average curve in the figure. The initial period should be long enough to capture all of the components of the model, in particular seasonalities and extra regressors: at least a year for yearly seasonality, at least a week for weekly seasonality, etc.

Cross-validation can also be run in parallel mode in Python, by setting specifying the parallel keyword. Four modes are supported

For problems that aren’t too big, we recommend using parallel="processes". It will achieve the highest performance when the parallel cross validation can be done on a single machine. For large problems, a Dask cluster can be used to do the cross validation on many machines. You will need to install Dask separately, as it will not be installed with prophet.

Cross-validation can be used for tuning hyperparameters of the model, such as changepoint_prior_scale and seasonality_prior_scale. A Python example is given below, with a 4x4 grid of those two parameters, with parallelization over cutoffs. Here parameters are evaluated on RMSE averaged over a 30-day horizon, but different performance metrics may be appropriate for different problems.

Alternatively, parallelization could be done across parameter combinations by parallelizing the loop above.

The Prophet model has a number of input parameters that one might consider tuning. Here are some general recommendations for hyperparameter tuning that may be a good starting place.

Parameters that can be tuned

Parameters that would likely not be tuned